MoviePass Is Bringing Back an Unlimited Plan, but There’s a Catch

The movie-ticket subscription service has been working hard to bring back a plan similar to the one that got it so many subscribers two summers ago.

MoviePass is bringing back an unlimited plan.

Despite the recent exodus of executives and managers at the company, the movie-ticket subscription service has been working hard behind the scenes to bring back a plan similar to the one that got it so many subscribers two summers ago: a $9.95-a-month unlimited plan.

The launch has been delayed for weeks, according to a source with knowledge of the decision, who told Business Insider that it will likely be set live in the coming days. And there are other signs that MoviePass is on the cusp of bringing back the unlimited option.

A staging URL showing details of the plan was posted on StockTwits over the weekend, and viewed by Business Insider. By Sunday afternoon, the link was brought down: 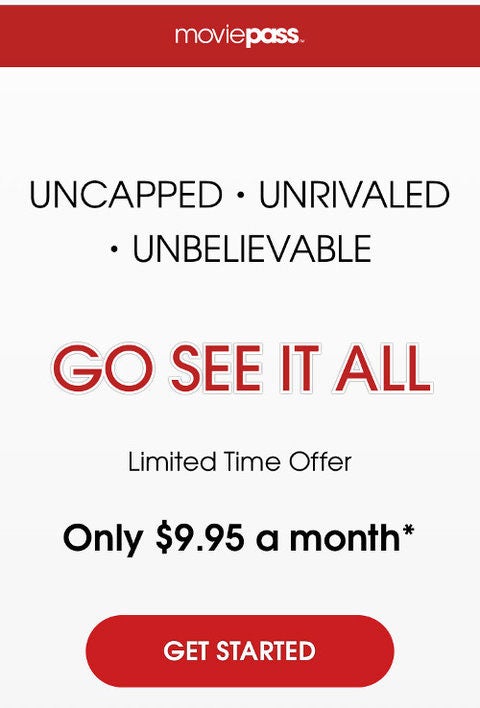 The design of the MoviePass site when it unveils its unlimited plan, according to the staging URL that was live over the weekend.

According to the details on the staging page, the unlimited plan will be available to new subscribers for a limited time for any 2D movie. But there’s a catch. In a clear move to limit power users, subscribers’ choices will be restricted in response to “excessive individual usage.”

For further explanation of what that means, they direct you to a section of the Terms of Use: 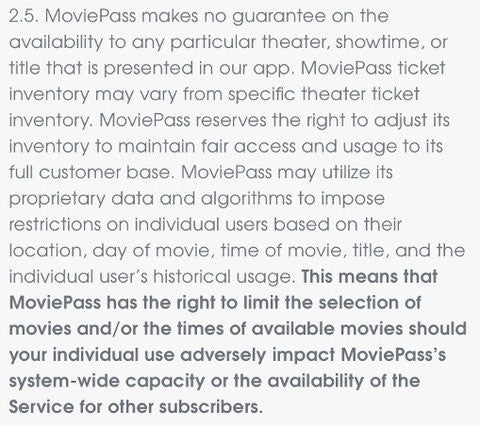 Section in Terms of Use addressing the unlimited plan.

There it says that “MoviePass makes no guarantee on the availability to any particular theater, showtime, or title presented on the app.” It also states that it may use its algorithms to restrict users “based on their location, day of movie, time of movie, title, and the individual user’s historical usage.”

These restrictions are similar to ones MoviePass already has put into place, which remove some popular showtimes and movies from the app.

That’s not the only catch in the new plan. MoviePass wants subscribers to pay the $9.95-a-month price on an annual basis through eCheck of ACH. With MoviePass’ management turmoil and heavy losses, some subscribers might be wary of paying for a full year up front, especially before they know how much MoviePass will restrict the available showtimes and movies. The ACH option would also require subscribers to give out their bank accounts. 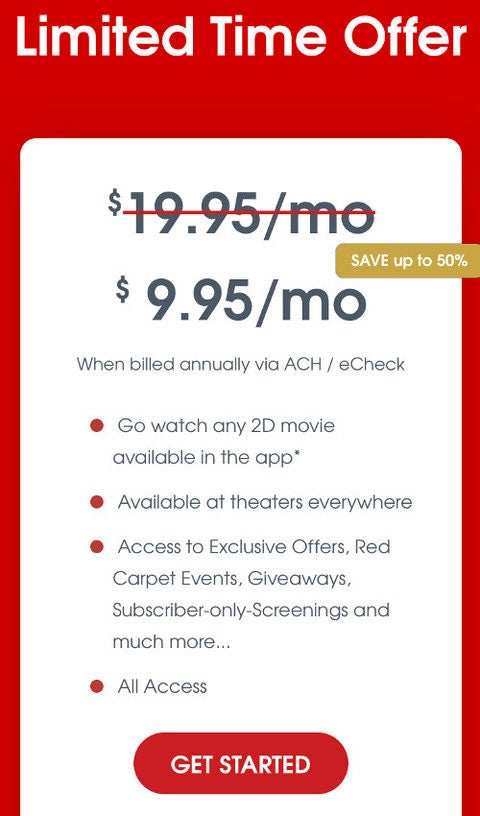 Currently, MoviePass offers a three-tier pricing plan ranging from $9.95 to $19.95, depending on where you live in the country. MoviePass abandoned the unlimited plan last August after gaining millions of subscribers, but burning through hundreds of millions of dollars to pay for their tickets.

So why go back to an unlimited plan?

It’s a move that has some inside the company baffled, and contributed to recent management turnover, a source close to MoviePass told Business Insider.

Last week, Business Insider reported that Khalid Itum, the executive vice president who was in charge of the day-to-day operations, had resigned along with three other management-level staff.